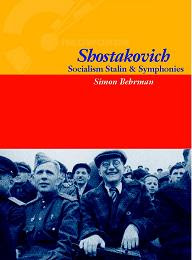 Perhaps more than any other composer Dmitri Shostakovich demonstrates how difficult it is to seperate music from its historical period. Shostakovich's life was marked by the rise and fall of the Russian Revolution and the great events that shook Russia. But Simon Behrman argues that, this is not simply reflected in Shostakovich's music, it shaped the very nature of his compositions.

In part this is negative. Towards the end of his life, Shostakovich went for several years without composing anything of note - a few film scores and so on - but this wasn't simply writer's block, it was a reaction to the huge pressure imposed upon him by the Soviet regieme which waxed and waned in its attitude to the composer.

But more importantly; and brilliantly illustrated by Behrman, Shostakovich's musical style was developed and shaped by the Russian Revolution and the tragedy of its isolation and defeat.

Revolutionary moments in history are always reflected in culture. Partly because of their inspiration - take William Wordsworth's famous declaration in reaction to the French Revolution for instance:

"Bliss was it in that dawn to be alive,
But to be young was very heaven!"

So in part Shostakovich's music reflects the excitement and potential of the liberation represented by the Russian Revolution, as the shackles of Tsarism were overthrown and society was controlled, albeit briefly, by ordinary men and women. Behrman shows how the rarely performed Second Symphony captures the essence of the revolution, almost as a story in musical form.

But more importantly perhaps, the revolution unleashed it's own cultural revolution. Shostakovich experiments with new musical forms and even new electronic instruments. The music post revolution must, almost by definition be different to that which has gone before.

But such a celebration of the "genuine" revolutionary tradition could not surive the isolation of the revolution and Stalin's counter-revolution. Thus Shostakovich became a difficult figure for the Soviet government. Loved and venerated around the world for his musical genius, the inherent criticism of the new regieme in his music couldn't survive.

Behrman shows how Shostakovich now moves in and out of popularity with Stalin's government. Lauded then banned, until once again he is popular as his powerful celebration of the resistance of Leningrad to the Nazi invasion in the Seventh Symphony fits with the ideological needs of the time. Some of his greatest pieces of music, however are too controversial and remain unperformed until the very end of the regieme in the 1980s.

Shostakovich never quite looses the passion that the revolution introduced to his, and millions of other people's lives. He remains a complicated figure for many who perhaps cannot quite get to grips with the politics of the period - in part this is why some assume that his criticism of Stalin maust make him an "anti-communist". But this is to misunderstand the complex interaction between the inspiration of the revolution and the despair of its fate.

Behrman illustrates this brilliantly through the life of one of the 20th centuries greatest composers in an accessible book that I hope will inspire readers to explore a set of musical compositions that might not normal be considered radical.

Simon Behrman's 2009 piece "From revolution to irrelevance: how classical music lost its audience" is well worth a read here.

Mahamdallie - Crossing the 'river of fire': the socialism of William Morris
Posted by Resolute Reader at 8:35 am

This is such an interesting post thanks indeed for sharing. I have not thought enough about how musc reflects history but this is most inspiring!