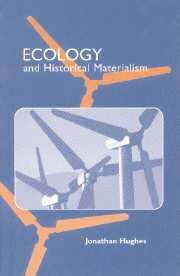 Published in 2000, Jonathan Hughes' book is an excellent and important defence of Marxism in the face of its Green critics. Coming out almost simultaneously with John Bellamy Foster's book "Marx's Ecology", both books should be seen as a contribution to the debates on how to understand ecological crisis in the context of human society and capitalism.

Hughes' book suffers from a somewhat abstract academic style - perhaps not surprising given its origins as a doctoral thesis. Certainly the rigorous logical examination of different critics of Marxism and the author's trenchant defence of Marx sometimes seems to obscure the points being made. Nonetheless this vigour is important as all-to often Marx's Green critics have been able to set the tone in a debate that is crucial to the future of human society.

Much of those criticisms have centred on a perception of Marxism being dominated by the idea of growth at all costs. Hughes argues that "central to the development of environmental thought" has been the "claim that there are definite limits to growth to which society must adapt". In response to this, Hughes points out that growth can have detrimental effects and that Marx and Engels were aware of this. He goes on to point out however, that:

"the limits in question are not a function of nature alone but of the way in which humans interact with nature and hence are absolute only in the abstract and in practice are relative to human knowledge and social organisation".

In other words, the problem of growth is one rooted in the nature of human society. A different method of organisation society could lead to a different type of growth, which may not be inherently anti-ecological.

Hughes follows this with an explanation of how Marx and Engels understood that human society was both dependent on and impacted back upon the natural world. Humans are also part of nature, and thus the process of changing the natural world also changes people themselves. For Hughes, this transformation of nature is one of the key distinguishing features of Marx and Engels' materialism. An importance was also shared by Marx and Engels themselves, who writing in the German Ideology say;

"the sensuous world around...is, not a thing given direct from all eternity, remaining ever the same, but the product of industry and the state of society..."

This constant transformation of the natural world is based on the continued development of the production process. Of course, since, as Hughes points out "ecological problems are problems arising out of humans' dealings with nature", for many, it is Marx and Engels insistence on the continued development of the forces of production - that is the problem. But Hughes points out that developing productive forces doesn't simply mean the development of newer forms of technology, and there are not reasons why this development couldn't happen in a way that is more ecological.

This review cannot hope to cover all the detail of Hughes' arguments. Indeed, I've over-simplified some of the criticisms of Marx that he is responding to. His defence of Marx's approach and his arguments place Hughes firmly in the camp of those who believe that Marx has much to offer those who want to create a more sustainable world. But I think there are a few problems with his book.

Firstly Marx and Engels spent their lives dedicated to the overthrow of capitalism and the ideological arming of a movement that could do that. Rarely in Hughes' work do you get a sense of that important transformation of society. While it is true that he examines the question of the transformation from Feudal societies to Capitalist ones as part of his attempts to explain historical change, I think his argument comes close to implying that there was a certain inevitability about this. He describes this change as:

"a transition which has been characterised in terms of a choice of non-fettering relations of production over fettering ones".

In reality of course, the transition from a society dominated by Lords to one dominated by capitalists wasn't a choice. Often it was marked by bloody and violent confrontation between social forces representing the different "relations of production". And it wasn't always successful. There were feudal societies that stagnated or went backwards because they couldn't develop.

Hughes does briefly acknowledge the importance that Marx attached to self-emancipation - because "it is through collective activity aimed at overthrowing contemporary society that people can acquire the qualities necessary for the future society and form a collective vision of how they want that society to be". But the necessity of revolution is that it also creates the political and social structures that are the basis for a new form of society. A truly sustainable society will be one that is based on a different way of organising our lives.

In addition, there is only a limited explanation of why capitalism is so destructive to the natural world. Granted, that this is perhaps slightly out of the remit of the book, but by skipping this aspect of Marx's thought Hughes has left the reader only partially armed for the debate about how we stop ecological catastrophe.

Marxism if it is anything is a guide to action, not simply an exercise in academic discourse. If we are to really develop Marxism into the ecological sphere we have to explore much further its ability to help us imagine an alternate future.
Posted by Resolute Reader at 8:48 pm

I'm in love with you! Haha, I'm only partially kidding. :)