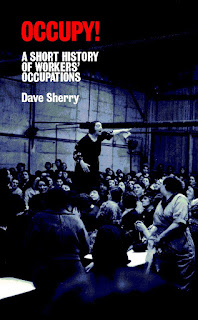 Anyone involved in climate or environmental politics will have been inspired last summer when the workers at the Vestas Wind Turbine blade plant on the Isle of Wight occupied their factory against its closure. They followed the Visteon workers who occupied their plants in Enfield and Ireland against closures. Sadly the Vestas workers didn't win, but the Visteon workers earnt a fantastic improvement in their redundancy payments.

It might be to early to predict, but activists around both these disputes felt a new atmosphere in the workers movement. For too long dormant, the desire to fight back against cuts and closures broke through. The occupation tactic was a new one to many in the movement. It's been a long time since such actions had been seen in the UK, but Dave Sherry rescues the tradition and helps us learn the lessons with this new book.

Sherry points out that occupations can be better than strikes. They don't leave you standing on a cold picket line for one thing. But more importantly, they prevent the use of scab labour to break a strike, the closure or dismantling of a plant's machinary or the sacking of those refusing to work. More importantly than this, they raise the prospect of workers control of the means of production and by their very nature, they encourage participation - in the strike and in the support of it.

Sherry looks at a few examples. He misses some - there is only limited mention of the actions in South America recently that showed the immense potential for workers to challenge private profit. But the examples Sherry used are inspirational. The mass occupation of the Italian factories in the early twenties brought the country to the brink of revolution. The experience of the US where sit-down strikes created unions in places no one had thought possible. The stories of France in 1936 and again in 1968, which shook a whole nation, and in the case of 1936, won serious gains that we now take for granted - paid holidays for instance.

This book is a polemic. Aimed at arming a working class under increased threat from economic recession, it also clearly argues that rank and file trade unionism is a must for such tactics to win. A few sad examples of bureacratic occupations that didn't inspire or push outwards, which went on to loose illustrate this. Not missing is Britain, which has a truely brilliant history of such struggles, which I was surprised to learn went on (with some success) well into the Thatcher years, a period which we are told was the end of trade unionism in this country.

Finally argues Sherry, we need socialist organisation that can help spread the solidarity and the message that workers can win. It's a lesson more and more workers are going to start to draw when the next government starts its cutbacks.