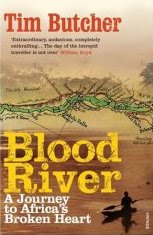 Pakenham - The Scramble For Africa
Posted by Resolute Reader at 8:07 pm

Gad, ain't it, just about, BLOOD EVERYTHING?