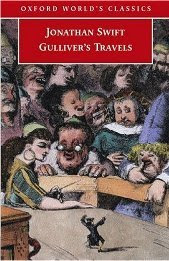 Jonathan Swift's book has, I suspect, spent too much time being read as a humourous account of fantastic voyages. It is really a powerful social critique of human society. From our petty religious squabbles (mirrored by the Lilliputten wars over which end of an boiled egg to start at) to the incomprehensibility of lawyers and our legal system to a society where lying is unknown, this pokes fun at every aspect of our lives. It entertained hundreds of thousands when it was first published and even now has the power to bring a wry smile to anyone out there who reads it today, in our more enlightened times.
Posted by Resolute Reader at 12:18 pm