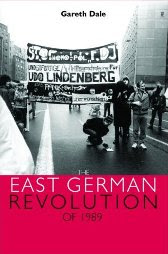 The closest I have ever been to revolution was to be one of the “Mauer-Spechte” who helped, from the western side, chip away at the Berlin wall in December 1989. Of course, by then, the wall was no longer the barrier it once was. As a symbol of oppression and dictatorship, it had been rendered totally impotent by the struggles of millions of ordinary East German’s over the preceding months.

In the summer of 1989 I’d visited East Berlin with an Uncle. Standing on the Eastern side of the Brandenburg gate he’d told me how he believed that the wall would always be there. Unconsciously he was echoing the thoughts of the then president of East Germany Honecker who argued that the wall would remain for a hundred more years.

Academic, Marxist and Eye-witness, Gareth Dale has documented the exact process that lead to this remarkable turnaround. Through a myriad of human stories, we hear of the millions of ordinary Germans who took to the streets in ever increasing numbers until their voices could no longer be ignored.

Some of this has been documented elsewhere. In particular, the role of the Leipzig protests that grew out of the “peace prayers” in the Nikolai Church. What Dale does very convincingly is to show how the role of the “masses” was the central driving force of the revolution. Arguing against those who believe that the fall of East Germany was simply the result of the growth of internal opposition groups, or the machinations of the west, Dale shows that 1989 saw a grass-roots revolution that showed “the potential that arises when established order breaks down in the face of collective protest”. How this potential was derailed down the path of German unity (which Dale shows was rarely a demand of those who took to the streets in 1989) and rampant neo-liberalism forms the bulk of the latter part of this work. There are many factors, but not least amongst them was the fear of many of those at the head of opposition organisations like New Forum, of the organised workers whose strikes (both real and threatened) shook the German state in early 1990.

At a time when Germans were storming the headquarters of the secret police, demonstrating in their hundreds of thousands, the threat of mass strikes in huge workplaces opened the opportunity for the very “grass roots” democracy that oppositionists had called for. Instead, New Forum condemned the strikes and turned their backs on the organised workers, help to open the way for the destruction of industry and economic collapse that followed reunification.

This is not to condemn those who had for so many years bravely opposed the East German dictatorship. They were not revolutionists and indeed where often swimmingly at the head of the flood, rather than leading it. The German state was easily able to co-opt them into harmless “round table” discussions rather than allow them to lead the struggle for real change.

Gareth Dales’ book is more than a fascinating examination of one of Europe’s most recent revolutions. It’s a reaffirmation of the role of the masses in revolutionary moments. Drawing upon recent works in Social Movement theory, it shows how ordinary men and women do extraordinary things, how revolution changes people’s lives and how even the most apparently powerful of states are often very weak indeed.
Posted by Resolute Reader at 5:42 pm