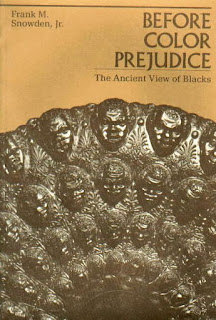 Those who argue that racism can be overcome, or ended are often confronted with the argument that racism or prejudice has always existed. Many, particularly from the Marxist tradition have argued however that racism is a more recent invention - that there have been societies in the past (and indeed today) were racism was unheard off.

For this reason, Frank Snowden's book is a fascinating read. He examines Ancient images and portrayals of the black people's of Africa in writings, sculpture and painting. His conclusions are stark, but simple. Racism, as a systematic system of prejudice and oppression or as a set of ideas that assigned stereotypes to a group of people based on their skin colour.

Of course there may have been prejudices, but Snowden finds surprisingly few examples. Indeed, rather the opposite, he argues that for one society, that of Ancient Egypt, skin colour was rarely mentioned when describing someone from the regions to the south of Egypt. The "Nubian" peoples, where instead venerated as excellent warriors, often used in Egypt's armies as mercenaries. Similarly in Roman and Greek writings, were skin colour was mentioned, it was almost always in a descriptive, rather than derogatory way.

Neither the Greeks, Romans or Egyptians had any systematic negative views of black people. Snowden describes contemporary descriptions of the Roman children expressing initial surprise and fear upon seeing a black person for the first time, but also compares this to modern research into childhood responses to someone of a different skin colour. Research that shows that such childlike response rarely leads to racist views in adult life.

If there is a flaw in the book, it's that it doesn't really shed much light on why racism is so prevalent in modern society. One argument that Snowden gives is that the ancient people's lived side by side with black people, thus there was no shock of discovery as white and black people met for the first time.

I think this is a weak explanation. There certainly were a few black and Asian people who travelled to the western lands in more recent times, and certainly (as Snowden acknowledges) the bible refers to black men and women so Christian countries would have not been living in ignorance of non-white peoples. This knowledge and fleeting encounters did not lead to racism in the way we know it.

I think that it is important to say that modern racism as had a concrete starting point. This is the invention of racial explanations, by the white establishment to explain the slave trade. The brutalities of slavery could only be justified through some sort of racial demonisation and this needed to be invented.

This perhaps is the missing chapter of Frank Snowden's book, though in itself the book is a clear (and beautifully illustrated) explanation of the lack of racism in the ancient past. It's worth quoting the author's conclusions at length, as his work, I believe has had to small a readership:

...in the ancient world there were prolonged black-white contacts, from an early date; first encounters with blacks frequently involved soldiers or mercenaries, not slaves or so-called savages; initial favourable impressions of black were explained and amplified, generation after generation, by poets, historian and philosophers; the central societies developed a positive image in of peripheral Nubia as an independent stae of considerable military, political and cultural importance; both blacks and whites were slaves, but blacks and slaves were never synonymous; black emigres were noT excluded from opportunities available to others of alien extraction, nor were they handicapped in fundamental social relations - they were physically and culturally assimilated; in science, philosophy and religion color was not the basis of a widely accepted theory concerning the inferiority of blacks.

Posted by Resolute Reader at 12:24 pm

It's interesting that some of the most racist societies during the last century were those with the least secure sense of identity: Germany - only recently unified, America - a nation of usurpers and immigrants and South Africa - ditto. We define who we are by what we're not.

Racism made less sense in a pre-industrial society. Take France for example, in Graham Robb's new book The Discovery of France he wrote that during Napoleon's time, fewer than half of the people in France spoke French. And in England, how much kinship did people in Northumberland and Somerset feel?

I think that racism, rather than being a primitive phenomenon that we're growing out of, is a very modern one.

Fascinating, thanks for the review. The Indian caste system is called the 'varna' in Sanskrit. One of the meanings of Varna is colour (http://dictionary.reference.com/browse/varna. So, the origins of the racism (which is what the caste system is) at least in India go back a couple of thousand years.