Primo Levi - If Not Now, When? 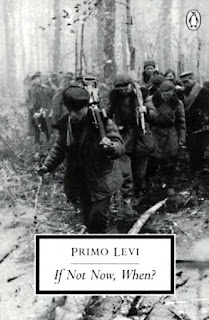 This is a work full of unimaginable pain and suffering. It follows a loose group of Jewish partisans behind German lines in the last few years of World War Two as they attempt to both survive and exact some military suffering on the German occupiers. Then as the war finishes, it follows their slow and difficult journey towards Italy and the hope of a ship to Palestine, where they dream of building a Jewish haven - Israel.

This isn't simply a work about the pain of war, nor the cold of the Soviet winter, though both of these are backdrops to an intense, difficult story. This is the story of people who have seen and survived horrors which we can't comprehend. The young Jew who watched the SS (boys scarcely older than himself) murder his family, the older Russian soldier who escaped a POW camp, and the man who watched all the Jews from his village forced to dig their own mass grave, before the Einsatzgruppen shot them all.

But these are people who don't give up. In contrast to those who would portray the victims of the Holocaust as men and women who meekly went to their deaths, Primo Levi celebrates those who never gave in. Those who fought back, those who took part in the Warsaw Ghetto uprising and those who believed that Nazism could be stopped.

But we are also confronted with other difficult facts. The liberating Russian army was as likely to lock up Jews, the defeated German villagers would still take pot-shots at Jews and for all the Zionist talk of Israel, the British made it hard for those who had escaped persecution to try and find refugee in Palestine.

Because this novel's characters are living, breathing individuals, who debate history, politics and religion, who question everything around them, it is much more than a simple tale of war. And because this was the most brutal of wars, the characters are never simple. They love, hate and seek revenge. But they also have hope. It's this hope that keeps them fighting and the novel is brilliant enough to fuel our hope that we can stop fascism, racism and anti-Semitism wherever they raise their head.
Posted by Resolute Reader at 7:27 pm

I love your post. Primo Levi's writing is amazing.