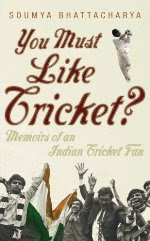 Watching the Australian cricket team destroy the pathetic English equivalent over the last few months has been a joy for those of us who support “anyone but England”. But for those of us who love a good game of cricket, such capitulation in the face of superior skills is a shame because a more balanced match, might produce a more special game.

There are great differences between the experience of cricket supporters in England and India, but there are many similarities too.

Indian cricket is so much more popular. Clearly it is a sport followed by millions of ordinary Indians; contrary to the way that cricket historically has been the province of the middle and upper English classes. Bhattacharya detects however, how the cricket grounds are no longer just the realm of ordinary people though as corporate boxes increasingly dot the arenas. He also tells how Indian cricketers are often superstars, their faces selling soft drinks and health aids, something Flintoff et al. have only got involved in very recently.

For the cricket fan this book is a lovely work – any true fan of the sport (as opposed to a particular national team) will recognise the authors tales of following the game at work, or dreaming of the impossible in the middle of the night as a game is recounted over the radio from the other side of the world.

There is more though than amusing anecdote - the author describes being in the middle of a match that descended into rioting as rivalries between the Indian and Pakistan nations were played out on the field.

Sport of course, can’t be separated from the society within which it’s played. Simultaneously, it offers some escape from those societies too. But something else is true, there is a universal experience that all sports fans have. This wonderful little book shows the hope, despair, and passion at the heart of all sports fans, wherever they are in the world. Knowing this, reminds us that we are all, after all, human.
Posted by Resolute Reader at 12:07 am